Phases, areas and framework of cooperation

Phases, areas and framework of cooperation 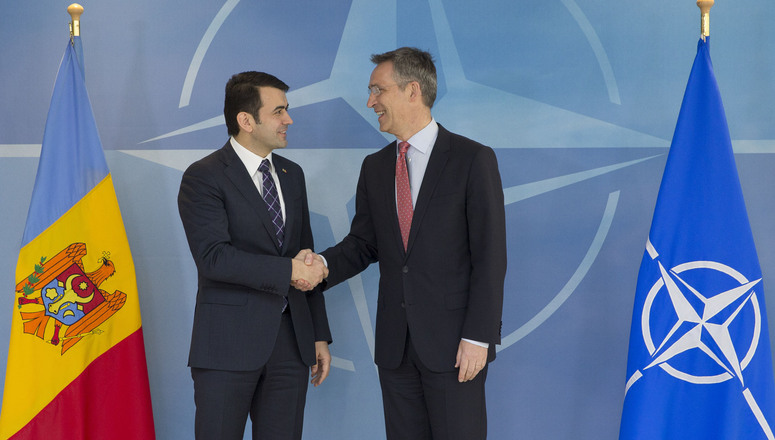 Moldova contributes to the NATO-led operation in Kosovo and cooperates with the Allies and other partner countries in many other areas. Support for the country’s reform efforts and for capacity building in the defence and security sector is a priority.

NATO and the Republic of Moldova actively cooperate on democratic, institutional and defence reforms, and have developed practical cooperation in many other areas. The country’s Individual Partnership Action Plan (IPAP) lays out its programme of cooperation with NATO.Moldova is seeking to draw closer to Euro-Atlantic standards and institutions. The extent of NATO-Moldova cooperation ultimately depends on the country’s willingness to continue its democratic reform process and strengthen its existing democratic institutions.

Areas of cooperation, reform plans and political dialogue processes are detailed in the Republic of Moldova’s Individual Partnership Action Plan (IPAP), which is jointly agreed with NATO for a two-year period.  A revised IPAP was agreed in August 2010. Key areas of cooperation include the preparation of strategic documents for reform, defence planning and budgeting and enhancing military education and training in Moldova.

Beyond supporting reform, another key objective of NATO’s cooperation with Moldova is to develop the ability of the 22nd Peacekeeping Battalion’s forces to work together with forces from NATO countries, especially in crisis-management and peacekeeping operations, and to develop a new training programme for the armed forces.

Moldova also works alongside NATO Allies and Partner countries in a wide range of other areas through the Partnership for Peace (PfP) and the Euro-Atlantic Partnership Council (EAPC).

Through regular participation in PfP training exercises, Moldova has taken steps to bring elements of its forces closer to full interoperability with Allied forces. Moldova has declared a range of units available for PfP activities, on a case-by-case basis. Four Moldovan helicopters currently support the UN mission in Afghanistan.

Moldova has also made a military airfield and other training facilities available for PfP activities and hosted a number of PfP exercises.

Moldova contributes to the fight against terrorism through its participation in the Partnership Action Plan on Terrorism (PAP-T).  This includes cooperation with the Allies on enhancing national counter-terrorist training capabilities and improving border and infrastructure security.

Work on enhancing military education and training in Moldova is focused on the Military Institute and the Peacekeeping Training Centre, both of which have been visited by, and are working closely with, NATO experts.

NATO has no direct role in the conflict resolution process in the region of Transdniestria. However, former NATO Secretary General Jaap de Hoop Scheffer has stated that the Alliance’s position remains that all the Istanbul commitments made by Russia must be fulfilled, including regarding the removal of Russian weapons and ammunition stored in the Transdniestria region. The current NATO Secretary General, Anders Fogh Rasmussen, has also previously stated that the Alliance fully expects Russia to abide by its international obligations, including respecting the territorial integrity and political freedom of neighbouring countries.

Defence and security sector reforms are core areas of cooperation. NATO and individual Allies have considerable expertise which Moldova can draw upon in this area. NATO supports the wider democratic and institutional and judicial reform process underway in Moldova. In consultation with NATO, Moldova is developing strategic documents on defence and security sector reform.  These documents are necessary for the conduct of a Strategic Defence Review.  Consultations are also underway on the steps needed for establishing a transparent defence planning and budgeting system which will be key tools for the conduct and implementation of the Strategic Defence Review.

NATO and individual Allies continue to assist Moldova in creating modern, mobile, high-readiness, well-equipped and cost-effective forces that are interoperable with those of the Allies. Moldovan participation in the PfP Planning and Review Process (PARP), since 1997, is instrumental in this process. Key reform projects include improving command and control structures, military logistics, personnel management, training and strengthening Moldova’s border patrol capabilities.

Moldova has agreed to train and develop designated units to achieve full interoperability with NATO and other Partner forces.  These units could be made available for NATO peace-support operations.  The Operational Capabilities Concept supports this process.

For Moldova, civil emergency planning is a priority area for cooperation with the Allies. Through participation in activities organised by NATO’s Euro-Atlantic Disaster Response Coordination Centre (EADRCC), Moldova is developing its national civil emergency and disaster-management capabilities. In consultation with the Allies, the country is also working on enhancing the legal framework for coping with such emergencies, and working to establish a civil crisis information system to coordinate activities in the event of an emergency. Science and environment

Under the NATO Science for Peace and Security (SPS) Programme, Moldova has received grant awards for about 18 cooperative projects. Projects include seismic risk reduction studies and river monitoring activities.

In particular, Moldova aims to increase scientific cooperation in several key areas, including research into counter-terrorism, the removal of dangerous chemicals, and reducing the risk and impact of environmental radiological contamination.

In 2009, Moldova hosted an advanced training course on cyber terrorism organised by the NATO Centre of Excellence for Defence against Terrorism. During the five-day programme, which was held within the framework of the Science for Peace Programme, participants learned how to identify and assess cyber threats, as well as ways to counter cyber terrorism. Over a number of years a Partnership for Peace Trust Fund project (in cooperation with the World Bank and the Global Environment Facility), has helped to ensure the identification, analysis, repackaging, and safe storage of over 3200 tonnes of dangerous chemicals and pesticides. A third phase of the NATO PfP Trust Fund project, to continue the destruction of the repackaged substances, began in the Spring of 2010 .

Moldova and NATO aim to improve public awareness of and access to information on NATO and the benefits of NATO-Moldova cooperation. With the support of NATO’s Public Diplomacy Division, an Information and Documentation Centre on NATO was inaugurated at the Chisinau State University in October 2007. NATO also supports Moldova in improving the training of public information specialists within the country’s armed forces.

NATO relations with the Republic of Moldova date back to 1992, when the country joined the North Atlantic Cooperation Council (renamed the Euro-Atlantic Partnership Council in 1997). Relations expanded when Moldova joined the Partnership for Peace programme in 1994. The focus on supporting the country’s domestic reform process has intensified since its first Individual Partnership Action Plan with NATO was agreed in 2006.

Areas of cooperation, reform plans and political dialogue processes are detailed in the Individual Partnership Action Plan (IPAP), which is jointly agreed with NATO for a two-year period.  Key areas of cooperation include support for wide-ranging reforms, assistance with the preparation of strategic documents, defence planning and budgeting, developing the interoperability of elements of the armed forces, and enhancing military education and training in Moldova.

Moldova also cooperates with NATO and other partner countries in a wide range of other areas through the PfP programme and the Euro-Atlantic Partnership Council (EAPC).

31 January 2007: Foreign Minister Andrei Stratan and Defence Minister Valeriu Plesca brief the North Atlantic Council on the reform process in their country during a visit to NATO.

July 2007: Phase I of a project for the destruction of pesticides and other dangerous chemicals is completed, centralising stocks in regional central storages.

October 2007:  An Information and Documentation Centre on NATO is inaugurated.

31 July 2008: The Euro-Atlantic Disaster Response Co-ordination Centre (EADRCC) receives an urgent request from Moldova and Ukraine to help them cope with major floods.

30 October 2008:  The NATO Secretary General visits Moldova for talks with President Vladimir Voronin and key ministers, as well as to give a speech at and visit the Information and Documentation Centre on NATO at Chisinau State University.

2010: Phase II of a project for the destruction of pesticides and other dangerous chemicals is completed, resulting in the set-up of a lab to analyse the chemical stockpiles.

20 August 2010:  A new IPAP is agreed, which the Moldovan authorities subsequently decide to release to the public for the first time.

July 2013:  Phase III of the project for the destruction of pesticides and other dangerous chemicals is launched, aiming to destroy 950 tonnes of chemicals.

September 2014: At the Wales Summit, Moldova is invited to take part in the newly launched Defence and Related Security Capacity Building (DCB) Initiative, which offers expert advice and assistance to interested partners.

June 2015: The NATO Partnership and Cooperative Security Committee pays a two-day visit to Moldova for talks on deepening cooperation and dialogue.

24 June 2015: Defence ministers endorse a package of measures under the DCB Initiative to help Moldova to enhance its defence and security institutions.