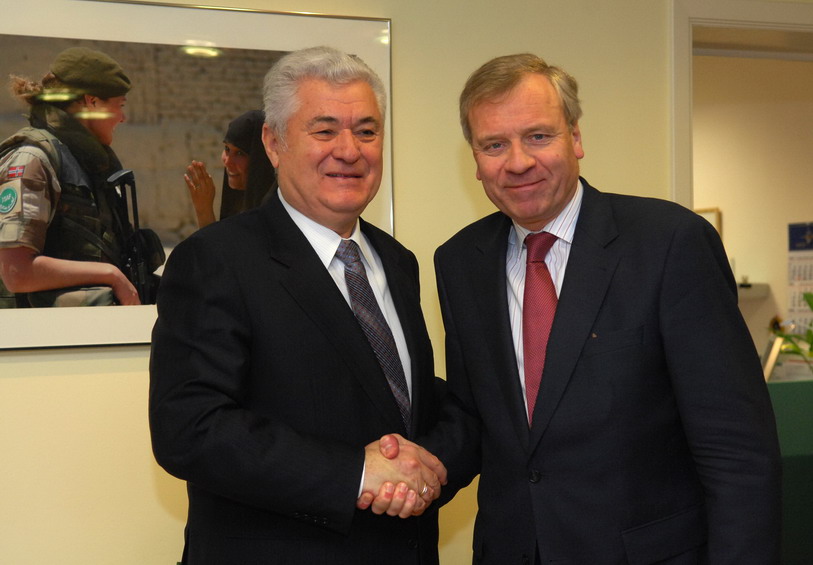 First contacts of the Republic of Moldova with the North Atlantic Alliance were established after the Declaration of Independence. On December 20, 1991 in Brussels took place the re-union of the North-Atlantic Cooperation Council (NACC), created after the assignment of the high level re-union of the NATO’ members in Rome on November 7-8 1991. The Minister of Foreign Affairs of the Republic of Moldova participated at the first re-union of the NACC. NACC was created to institutionalize a permanent body for consultations between the adversaries on major problems of the European security.
On January 6 1994, at the high level re-union of the North Atlantic Alliance was examined the American initiative for “Partnership for Peace”, and the President of the Republic of Moldova expressed the availability of our country to line up to the Program.
On March 16 1994, at the general NATO Headquarter in Brussels, took place the first meeting of the President of the Republic of Moldova and the NATO Secretary General, followed by the signing of the cadre document of the “Partnership for Peace”. Republic of Moldova was the second country in CSI after Ukraine to sign the document.
On May 29 1997, in Sintra (Portugal) took place the NACC re-union at the level of ministers of foreign affairs. In the line with the necessity of establishing new relations with the cooperation partners, NATO proposed to transform NACC into a more efficient structure – The Euro-Atlantic Partnership Council (EAPC).
In order to coordinate more efficient the NATO activities, on December 16 1997, were institutionalized the NATO Mission of Republic of Moldova. The chief of mission was appointed the ambassador of the Republic of Moldova to Belgium.
The visit of the President V. VORONIN to the general NATO Headquarters on June 28 2001 was very important due to the endorsement of the Memorandum with the NATO organization for Maintenance and Supply (NAMSO) regarding the logistic cooperation.
The Memorandum contributed to the institutionalization of the Fund for Special Affectation in 2002, financed by the NATO member countries designed to destroy an allotment of anti-person mines and expired-term ammunition from the subsidy of the National Army, as well as an important quantity of missile fuel the melanj type.

The project was implemented by the NATO Agency for Technical Maintenance and Supply (NAMSA). Due to this project were eliminated an ecological threat and foresights on interdiction of anti-person mines of the Ottawa Convention were accomplished. Hereby, Republic of Moldova was the first country to interdict this type of mines from its arsenals. Another project implemented with the NATO financial support regards the annihilation of the reserves of interdicted and unusable pesticides from Republic of Moldova.
Beginning with 2002, Republic of Moldova is part of the Security Cooperation Group in South-Eastern Europe (SEEGROUP), lining up to a number of relevant projects, such as SEESTUDY, SEECHNAGE, SEESTAFF, and SEEMAG.
Since 1997 Republic of Moldova extended the Cooperation with NATO to the scientific domain. Hereby, since that time NATO backed up two projects of the Scientific Academy of the Republic of Moldova accounted to 153000 dollars SUA regarding the access of the Scientific Academy to the INTERNET network.
In 1999 was finalized the project on creating the informational network of the Scientific Academy with the NATO financial support. The project “Informational network of the polytechnic community” drafted by the Polytechnic University from Moldova obtained the financial support of the Alliance. In June, with the NATO support was created the RENAM association with a educative-informational objective. Therefore, scientific researches from Moldova got scholarships in Italy, Canada, and other countries.
In the scientific dimension, projects concerning the environment security were implemented, with the Alliances financial support.  One of this refers to the water management of the Nistru and Prut rivers, consisting of a training mechanism for testing the level of pollution in the waters of those to rivers and for alert in cases when this level would exceed the critic parameters.

On June 7 2005, the President of the Republic of Moldova called for the signing of the Individual Partnership Action Plan (IPAP) between NATO and Republic of Moldova, within the North-Atlantic Council session in Brussels.
In the document comprises all the arias of the security sector, such as the cooperation with the European institutions, reform in the security domain, participation in common operations.
IPAP is designed for the organization and harmonization of all the aspects of the NATO relations within the “Partnership for Peace” Program and the North-Atlantic Council.  The IPAP Plan was drafted by the National Commission, instituted through a presidential decree from August 5 2005. During the period of September 2005 – March 2006 the National Commission for the IPAP Implementation in collaboration with the NATO International Secretary worked upon the Plan’s project.
On May 19 2006, the NATO North-Atlantic Council adopted the Individual Partnership Action Plan Republic of Moldova – NATO.
One of the main objectives of the IPAP mechanism is to strengthen the political dialog and the consultation between the Republic of Moldova and NATO, to ensure the cooperation for facilitating and supporting the domestic and foreign environment. As part of this dialog, Moldova gets the possibility to discus and back up the desire and ability to implement the main principles of the Partnership for Peace Cadre Document and of the main document of the Euro-Atlantic Partnership Council, in its domestic and foreign policy.
The IPAP Plan Republic of Moldova-NATO, launched on June 16 2006 within the national domestic policy by the Government of Republic of Moldova, consists of 4 main chapters:
1) Security and political problems;
2) Military and defence problems;
3) Public information, science and planning the emergency situations;
4) Administrative aspects, information and resources protection, contained into two distinct parts: the main political and reformative objectives of the Republic of Moldova (I) and the reformative arias that represent the objects for NATO consultation (II).
According to the Plan, the main strategic objectives of the Republic of Moldova are: European Integration, to strengthen the dialog and deepen the relations with the North-Atlantic structures. Considering its neutrality status, Republic of Moldova, through the IPAP implementation, doesn’t chase to join NATO, but expects to use the Plan for the hastening of the reformation process in the defence domain and national security. Hereby, Republic of Moldova will create a political-judicial base necessary for the IPAP implementation, as well as the relevant institutional mechanisms
Within the state integrity recovering, Republic of Moldova wishes to readjust the transnisrian conflict.

Therefore, Moldova considers absolutely necessary the participation at the negotiations of all interested international agents, but firstly the EU, USA, Russia and Ukraine. An important attention in the conflict resolution concerns the state border security, especially on the transnistrian parameter at the moldo-ukrainian border. Considering the relations with the neighbors, IPAP states that our country promotes relations of friendly neighboring with Romania and Ukraine. The development of the relations with Romania will be based on common European values. Republic of Moldova pronounces itself for durable relations of cooperation, mutually advantageous with Russia.

Moldova will strengthen the cooperation with other states from within the Stability Pact for South-Eastern Europe, OCEMN (Organization for Economic Cooperation at the Black Sea), SEECP (Process of Political Cooperation in South-Eastern Europe), SEEGROUP (South-East European Group for Security Cooperation) and GUAM as a model contributing to the consolidation of the regional stability and security.
The Plan states that Republic of Moldova will continue to cooperate with the European Council, OSCE, and European Union to promote the democratic reforms, for ensuring the law supremacy and the concordance of the legislation and national practices in the human rights domain with the relevant international standards. Moldova will continue the reformation of the judicial system, the election system reform, the central and regional administration reform. Also, the juridical framework which controls the liberty of press and public access to the information will be improved.

Moldova will consolidate its efforts to fight corruption, including the participation in international cooperation within the GRECO (Group of States Fighting Corruption) and the Stability Pact for South-Eastern Europe. In order to achieve these goals Republic of Moldova will modify the Regulation of the Parliament of Republic of Moldova with the European standards; will adjust the national legislature and practices to the European Court of Local Government; will organize and maintain an efficient dialog, open and continuous between the state institutions and the civil society; will totally implement the recommendations of the Parliamentary Assembly of the European Council regarding the functioning of the democratic institutions in the Republic of Moldova and the Decision of the Parliament of the Republic of Moldova (nr.248-XVI from 11.11.2005) etc.
For countering international terrorism, organized crimes and human trafficking, Republic of Moldova will improve its juridical and institutional framework; will deepen the inter-institutional cooperation and coordination; will establish cooperative relations with the respective subdivisions within the NATO International Secretariat and the member countries; will fortify the surveillance over the export; will fortify the measures on countering the money washing phenomena. Therefore, Moldova will improve the cooperation with UN, OSCE, OIM, Interpol and other international organisations.
A great attention is paid within the IPAP to the democratic control over the armed forces, while the objectives of improving and development of this will be realized through concrete actions, practically in all social domains. Hereby, in deepening the relations with NATO, Republic of Moldova will ensure its armed forces to serve and protect the democratic development of the country. Accordingly, to make possible the assuming of the commitment of edifying a viable capacity for providing nations security, can be done through the democratic, comprehensive control over the armed forces. The special actions that should be undertaken refer to the consolidation of the civilians role within the decision making process, at all levels, in the national security system and the engagement of the civilians in the military institutions, as well as the implementation of the NATO standards in the restructuration of the armed forces and to promote mass-media and public access to the information on security and defence.
Therefore, Republic of Moldova will review and improve the juridical framework which governs the responsibility division among the supreme bodies of the state. The state will apply the international experience in this domain. Moldovan authorities will broaden the number of civilians employed at the Ministry of Defence and will encourage civil society participation in examining the national security and defence issues.
During the IPAP implementation, Republic of Moldova will coordinate its actions with the EU and the international organizations, to ensure the compatibility between IPAP, EU-Moldova Action Plan, SCERS, to avoid the activities duplication and overlapping. An important attention will paid to the consultations with NATO, OSCE, UNDP, UNEP and other international organizations/agencies for implementing the projects on strengthening the ecological security in the country.

In August 2010, the Moldovan Government approved the Individual Partnership Action Plan Moldova – NATO updated.The plan was updated according to current needs and priorities of the state, following the end of the first cycle of implementation by Moldova of IPAP. This document provides a broad agenda of measures related to strengthening democratic control of armed forces, scientific cooperation and civil protection in exceptional circumstances. The new provisions specify and develop previously planned actions, the main difference is the inclusion of a new objective on defense and security sector reform in order to increase the level of transparency and its efficiency
Additional Documents: