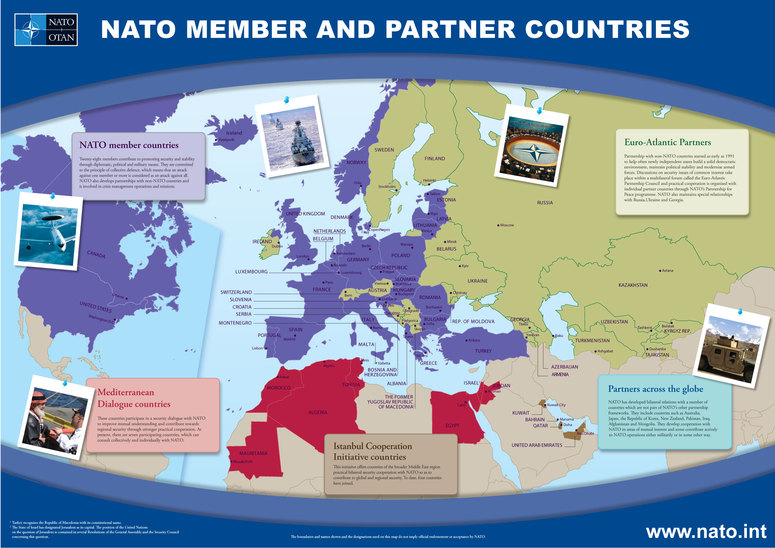 Goals and objectives
The Partnership for Peace (PfP) is a programme of practical bilateral cooperation between individual Partner countries and NATO. It allows Partner countries to build up an individual relationship with NATO, choosing their own priorities for cooperation.
Based on a commitment to the democratic principles that underpin the Alliance itself, the purpose of the Partnership for Peace is to increase stability, diminish threats to peace and build strengthened security relationships between individual Partner countries and NATO, as well as among Partner countries.
Activities on offer under the PfP programme touch on virtually every field of NATO activity, including defence-related work, defence reform, defence policy and planning, civil-military relations, education and training, military-to-military cooperation and exercises, civil emergency planning and disaster-response, and cooperation on science and environmental issues.
The essence of the PfP programme is a partnership formed individually between each Partner country and NATO, tailored to individual needs and jointly implemented at the level and pace chosen by each participating government.
A “toolbox” of PfP tools and mechanisms supports cooperation through a mix of policies, programmes, action plans and arrangements. At the Lisbon Summit in November 2010, as part of a focused reform effort to develop a more efficient and flexible partnership policy, Allied leaders, decide to take steps to streamline NATO’s partnership tools in order to open all cooperative activities and exercises to partners and to harmonise partnership programmes.
This, in essence, will mean opening the PfP “toolbox” to all partners, whether they be Euro-Atlantic partners, countries participating in the Mediterranean Dialogue and the Istanbul Cooperation Initiative, or global partners.
The Euro-Atlantic Partnership Council provides the overall political framework for NATO’s cooperation with partners and the bilateral relationships developed between NATO and individual partner countries within the Partnership for Peace programme.
There are currently 22 countries in the Partnership for Peace Programme.

Partner countries choose individual activities according to their ambitions and abilities. These are put forward to NATO in what is called a Presentation Document.

An Individual Partnership and Cooperation Programme is then jointly developed and agreed between NATO and each Partner country. These two-year programmes are drawn up from an extensive menu of activities, according to each country’s specific interests and needs.

Following implementation of the decisions taken at the Lisbon Summit, all partners will have access to the new Partnership and Cooperation Menu, which comprises some 1600 activities.

Some countries have chosen to deepen their cooperation with NATO by developing Individual Partnership Action Plans (IPAPs). Developed on a two-year basis, such plans are designed to bring together all the various cooperation mechanisms through which a partner country interacts with the Alliance, sharpening the focus of activities to better support their domestic reform efforts. In line with the new partnerships policy – being prepared in time for the Berlin meeting of NATO foreign ministers in April 2011 – the development of IPAPs will also be open to partners beyond the EAPC/PfP framework, on a case-by-case basis, upon approval of the North Atlantic Council.

A “toolbox” of PfP tools and mechanisms supports cooperation through a mix of policies, programmes, action plans and arrangements. Many of these are focused on the key priorities of building capabilities and interoperability, and supporting defence and security-related reform.

Partner countries have made and continue to make significant contributions to the Alliance ’s operations and missions, from the Balkans to Afghanistan, Iraq, Darfur and the Mediterranean Sea. A number of tools have been developed in order to ensure that Partner forces are capable of participating actively in NATO-led operations.

The Planning and Review Process (PARP) helps identify, develop and evaluate forces and capabilities which might be made available for NATO multinational training, exercises and operations. It also provides a framework for Partners to develop effective, affordable and sustainable armed forces as well as promote wider defence and security sector reform efforts. PARP is open to all Partner countries on a voluntary basis. Under PARP, planning targets are negotiated with each country and regular reviews measure progress. PARP is managed by Allies and participating Partners together. In line with the new partnerships policy, participation in the PARP will also be open to partners beyond the EAPC/PfP framework, on a case-by-case basis, upon approval of the North Atlantic Council.

The Operational Capabilities Concept (OCC) is used to evaluate the level of interoperability and military effectiveness of Partner forces. It includes a database of forces declared available for NATO-led non-Article 5 operations. A feedback mechanism helps ensure compliance with NATO standards and requirements.

The Political Military Framework (PMF) sets out principles, modalities and guidelines for the involvement of all Partner countries in political consultations and decision-shaping, in operational planning and in comand arrangements for operations to which they contribute. At Lisbon, the Allies decided to review the Political-Military Framework for NATO-led PfP operations in order to update the way NATO works together with partner countries and shapes decisions on the operations and missions to which they contribute. This work is expected to be completed in time for the NATO defence ministers meeting in June 2011, with a progress report to foreign ministers in April.

The Training and Education Enhancement Programme (TEEP) is the primary tool to promote training to support military interoperability, especially through collaboration among national institutions focused on operational/tactical level training for staff taking part in multinational headquarters. The Military Training and Exercise Programme (MTEP) allows Partners to take part in exercises to promote interoperability. Through the MTEP, a five-year planning horizon provides a starting point for exercise planning and the allocation of resources. The Bi-Strategic Command Military Cooperation Division, which is principally located at SHAPE in Mons, Belgium, is responsible for supporting partner involvement in exercises.

The Partnership Action Plan on Terrorism (PAP-T) is a framework through which Allies and Partner countries work to improve cooperation in the fight against terrorism, through political consultation and a range of practical measures. It has led to improved intelligence-sharing and cooperation in areas such as border security, terrorism-related training and exercises, and the development of capabilities for defence against terrorist attack or for dealing with the consequences of such an attack.

Several tools have been developed to provide assistance to Partner countries in their own efforts to transform defence and security-related structures and policies, and to manage the economic and social consequences of reforms. A key priority is to promote the development of effective defence institutions that are under civilian and democratic control.

The Partnership Action Plan on Defence Institution Building (PAP-DIB) aims to reinforce efforts by Partner countries to reform and restructure their defence institutions to meet domestic needs as well as international commitments.

Education and training in a number of areas is offered to decision-makers, military forces, civil servants and representatives of civil society through institutions such as the NATO School in Oberammergau, Germany; the NATO Defense College in Rome, Italy; and the 17 national PfP Training and Education Centres. Moreover, the Education and Training for Defence Reform initiative supports the education of civilian an military personnel in efficient and effective management of national defence institutions under civil and democratic control.

Through the PfP Trust Fund policy, individual Allies and Partners support practical demilitarization projects and defence reform projects in Partner countries through individual Partnership for Peace Trust Funds. One Trust Fund project, set up in 2008, is the Building Integrity Initiative. Conducted in cooperation with the non-governmental organization Transparency International, it aims to reduce corruption in the defence establishments of Allies and Partners alike.