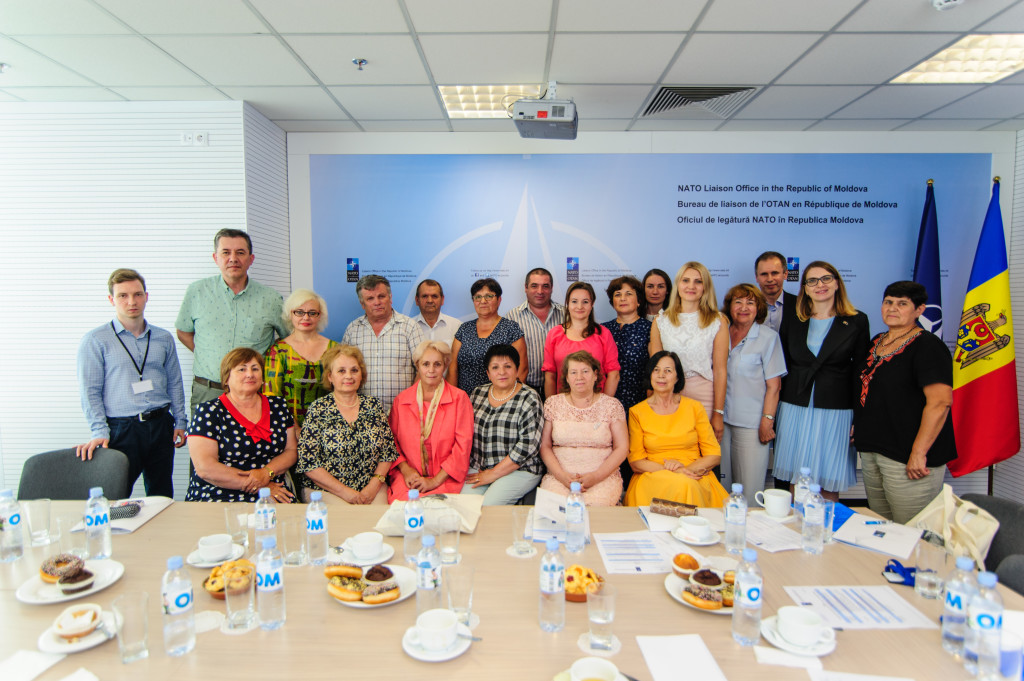 The Information and Documentation Center on NATO in Moldova (IDC on NATO) is organizing information activities for opinion formers from the Northern, Central and Southern parts of Moldova, aiming to raise public awareness of Moldova-NATO cooperation and to enhance the dialogue on this topic between the experts in the security and defence field and representatives of Moldovan civil society, academia, local public administration and mass-media.

On July 18, 2019, an activity was carried out in this respect, involving 20 opinion-makers from the Hincesti and Telenesti districts. According to the program, the opinion leaders visited the NATO Liaison Office in the Republic of Moldova and the Embassy of Lithuania to the Republic of Moldova (NATO Contact Point Embassy in Moldova).

Visit to the NATO Liaison Office in the Republic of Moldova

As according to Ms. Elena Marzac, the Executive Director of the IDC on NATO “it is necessary to increase the security culture, through active involvement of civil society and raising awareness of the participatory nature of security”.

“Moldova’s cooperation with NATO is mutually beneficial and includes various programs and activities”. Ms Kristina Baleisyte, the Head of the NATO Liaison Office in Moldova, informed the participants about NATO’s broad assistance to Moldova for improving the security and defense sector, but also about joint projects and activities, including, but not limited to: DEEP Programme provides advice on how to build a professional military education system; NATO Trust Fund project helped Moldova safely dispose of 1,269 tons of pesticides and dangerous chemicals; Through NATO SPS, Moldova has developed its first national action plan for implementing UN SCR 1325 on WPS; Moldovan troops are present in the KFOR mission, and the support they offer is very much appreciated by NATO.

“Practical cooperation began when Moldova joined the Partnership for Peace (PfP) program in 1994. The emphasis on support for reform has progressively increased since 2006 when the country signed the first Individual Action Plan of the RM-NATO (IPAP). At the request of the Moldovan government, a NATO civil liaison office was opened in Chisinau in December 2017 to promote practical co-operation and facilitate support for country reforms”, stressed the Head of the NATO Liaison Office in Moldova.

Mr. Veaceslav Iatco, the Head of the NATO and Political and Military Cooperation Unit at the Ministry of Foreign Affairs and European Integration of the Republic of Moldova spoke about NATO’s role in the current security environment and peacekeeping on the European continent during 70 years from it’s creation. “Threats, such as cyber attacks, international terrorism, the proliferation of weapons of mass destruction, but also other perils, do not recognize national borders, they affect many countries, which is why the cooperation between the countries is welcome in this respect”, Mr Iatco said.

Visit to the Embassy of Lithuania in the Republic of Moldova

After visiting the NATO Liaison Office, the participants visited the NATO Contact Point Embassy in Moldova, a position held by the Embassy of the Republic of Lithuania to the Republic of Moldova.

Mr. Andrej Didenko, Counselor Minister, Deputy Head of Mission, informed the public about Lithuania’s foreign policy in the post-soviet period and the country’s security options. According to his words, Lithuania’s accession to NATO is based on the provision set out in the Constitution of the Republic of Lithuania: “to guarantee the security and independence of the country, the well-being of citizens and their fundamental rights and freedoms.” Mr. Didekno spoke about the parallel process of integration into the EU and NATO structures, about the accession requirements, about the reforms that the country passed to ensure its own security. According to Mr. Didenko, “security begins with each of us”.

The visit of the 20 opinion-makers from Hincesti and Teleneşti districts is being carried out within a project implemented by the Information and Documentation Center on NATO in Moldova, with the support of the NATO Liaison Office in Moldova, in the context of the 70th anniversary of the the foundation of NATO.

The NLO is NATO’s diplomatic representation in the Republic of Moldova, opened in 2017 at the request of the Moldovan Government and ratified by the Parliament. NLO’s mission is to facilitate political dialogue and practical cooperation, to serve as a channel of communication to ensure a better understanding and coordination between NATO and Moldova. NLO supports NATO assistance projects that are run by the Moldovan partners, introduce or provide more concrete information to those interested (Moldovan governmental and non-governmental entities, NGOs, universities) on NATO programmes and how to make best of them.