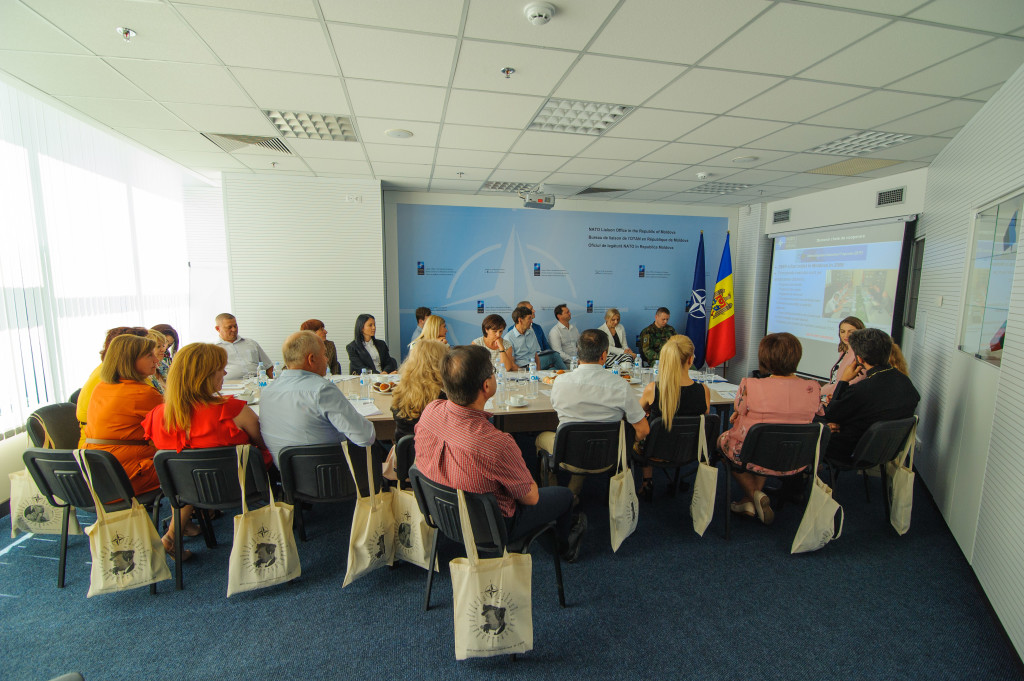 On July 25, 2019, a group of opinion formers from the Cahul and Leova districts participated in a study visit organized by the Information and Documentation Center on NATO in Moldova. The participants represent the local public authorities, educational institutions, civil society organizations, and force institutions from the Southern region of Moldova.

Visiting the NATO Liaison Office, the opinion formers met and learned about NATO from the Head of the Office. Ms. Baleisyte spoke about NATO’s basic principles of cooperation with Moldova, which are, as listed – full respect for the sovereignty, independence, territorial integrity and constitutional neutrality of the Republic of Moldova; a cooperation based on the requests expressed by the Moldovan side; the ownership of projects implemented with NATO’s support is in the hands of Moldova.

Mr. Anatolie Zavtur listed some concrete projects implemented by the Ministry of Defense with NATO’s assistance, including the famous pesticide project – the NATO Trust Fund for the Destruction of Dangerous Pesticides and Dangerous Chemicals in the Republic of Moldova; the creation of a Cyber Incident Response Center of the Armed Forces of the Republic of Moldova within the Ministry of Defense. Mr. Zavtur also spoke about NATO’s expertise in developing strategic documents – the National Defense Strategy, the Military Strategy, the first NAP for the implementation of UN Security Council Resolution 1325 on the Women, Peace and Security Agenda. Special assistance to the Military Academy, Alexandru cel Bun, for the development of professional courses and bachelor’s and master’s programs was mentioned. Mr. Zavtur stressed that the participation of Moldovan troops in the KFOR peacekeeping mission is also a form of mutually beneficial cooperation.

At the Embassy of Romania, Mr. Cristi Ladaniuc took the opportunity to inform the audience about the benefits to Romania in the context of NATO and EU integration, but also talked about the important role of opinion-makers in the dissemination of information from the first source on co-operation with NATO.

This activity is implemented by the NATO Information and Documentation Center in Moldova in co-operation with the NATO Liaison Office in Moldova (NLO), in the framework of the project “Study visits of opinion formers from the regions”, aiming to raise awareness of the public opinion to NATO-Moldova cooperation and to improve dialogue on this issue with civil society, academia, local public administration and media representatives. The project is being carried out in the context of the 70th anniversary of the foundation of NATO.

The NLO is NATO’s diplomatic representation in the Republic of Moldova, opened in 2017 at the request of the Moldovan Government and ratified by the Parliament. NLO’s mission is to facilitate political dialogue and practical cooperation, to serve as a channel of communication to ensure a better understanding and coordination between NATO and Moldova. NLO supports NATO assistance projects that are run by the Moldovan partners, introduce or provide more concrete information to those interested (Moldovan governmental and non-governmental entities, NGOs, universities) on NATO programmes and how to make best of them.