Materiale Video#3 Dialogue with experts: Disinformation during crisis: the impact on human security

#3 Dialogue with experts: Disinformation during crisis: the impact on human security 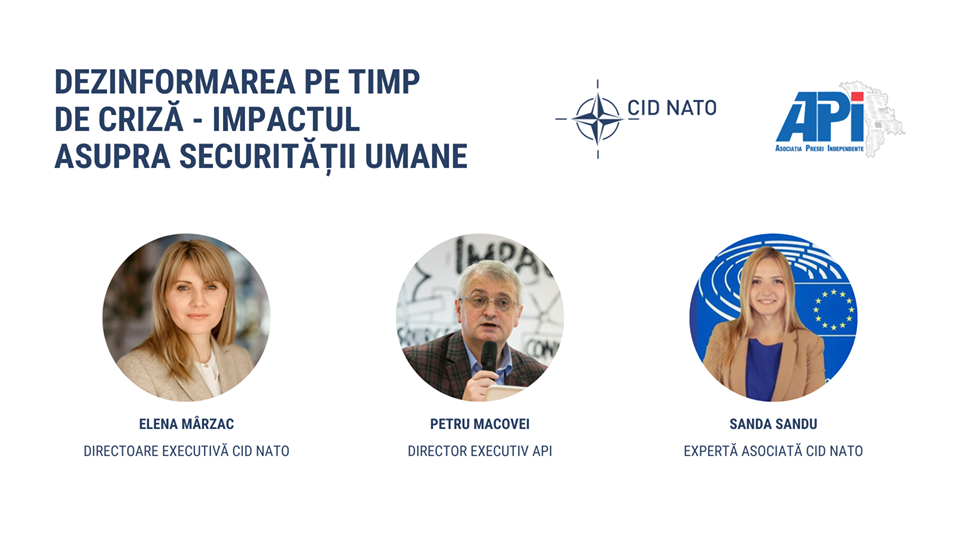 The Information and Documentation Center on NATO (IDC on NATO) from the Republic of Moldova continues the series of dialogues with security experts to analyze how the pandemic influences national security. Today we are talking about disinformation during pandemic with Mr Petru Macovei, Director, Association of Independent Press (API); Ms Elena Marzac, Executive Director, IDC on NATO; and Ms Sanda Sandu, Associated expert, IDC on NATO. The virtual space abounds with misinformation and conspiracy theories about COVID-19. The reasons for the spread of misinformation are numerous and include political objectives, self-promotion and attracting attention as part of a business model. The scenarios with the highest audience are usually launched by state and non-state actors to create chaos and destabilize democracies. Moldova has not remained immune to “infodemia”. False news comes both from politicians and from certain actors who aim to manipulate citizens.

Experts find that:
– The pandemic brought to light the existing problems related to internal and external propaganda.
– The lack of information from the official and credible first source, motivates citizens to use alternative sources.
– The narratives circulating in the international space, but also in the regional one, are strongly influenced by geopolitics, and the main promoting actors are China and Russia.
– False narratives include: NATO / US created a biological weapon; world elites want to reduce the population; the pandemic will lead to the disintegration of NATO / EU; The US wants to establish global hegemony under the umbrella of the pandemic; COVID-19 does not exist or is a simple cold; vaccines are intended to introduce chips into humans so that they can be controlled; the direct link between 5G technology and the spread of the pandemic.
– The purpose of misinformation is to spread distrust among citizens towards national and international institutions.
– Government institutions face difficulties in the fight against misinformation.
– Some high-ranking officials are themselves the source of misinformation, making erroneous statements that distort reality. The information is partial or intentionally missing in the public space, especially about external assistance.
– The lack of reaction from the authorities only increases the hysteria of the population.
– During the pandemic, the signals from citizens on stopfals.md about the news that promote false and propagandistic topics were amplified 4 times.

Direct impact on the national security of the Republic of Moldova:
– Polarization of Moldovan society;
– Undermining democracy;
– Undermining the process of European integration;
– Trapping Moldova in a “security trap” by creating confusion regarding the direction of security assurance;
– Influencing the agenda in the decision-making process;
– Decreased trust in state institutions.

Expert recommendations:
– There is a need to strengthen inter-institutional, transparent, regular, credible strategic communication.
– Institutions must involve health experts in communicating with the public in a clear manner.
– In-depth collaboration between state institutions and the media is required.
– Institutional credibility must be built on the principles of decision-making transparency.
– Citizens need to be informed from credible sources and look at things critically.
– Institutions must react proactively as certain misinformation topics have not turned into a hard-to-stop snowball.
– It is absolutely necessary to develop a culture of online “hygiene” among citizens.
– The state needs to strengthen cybersecurity as the pandemic serves as a good opportunity for malicious actors to exploit online social engineering.
– The society needs to report the false news to the authorities, but also on the stopfals.md platform

The Information and Documentation Centre on NATO is a noncommercial, autonomous organization set up as a part of the 2006-2009 Individual Partnership Action Plan (IPAP) Republic of Moldova-NATO. The Center promotes the Euro-Atlantic values and principles, informs the society about the multiple aspects of security, and supports the governmental institutions in security and defense sector reform.