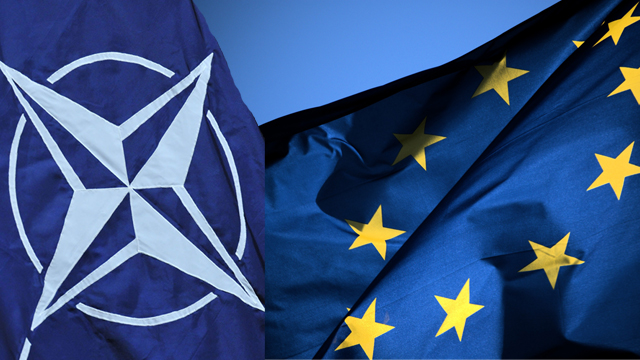 NATO – EU Relations
NATO and the European Union (EU) are unique and essential partners who share common values, strategic interests and a majority of member nations (22). The two organisations cooperate on a wide variety of issues, including crisis management, capability development,building the capacities of partners, addressing hybrid threats and maritime security.
A new framework for cooperation NATO and the EU meet regularly to discuss issues of common interest. The NATO Secretary General engages with his EU counterparts and has addressed the European Council, EU Ministerial meetings and the European Parliament’s Foreign Affairs Committee in joint session with the sub-committee on Security and Defence on numerous occasions. Meetings also take place between ministers and ambassadors, and at staff level.
In July 2016, NATO and the EU took their relationship to a new level. In a Joint Declaration in Warsaw, NATO Secretary General Jens Stoltenberg, the President of the European Council Donald Tusk, and the President of the European Commission Jean-Claude Juncker pledged to boost cooperation in key areas, including countering hybrid and cyber threats, supporting partners in defence capacity building, improving information-sharing and cooperation in the Mediterranean, as well as on defence capabilities, the defence industry and research,
and exercises.
In December 2016, Secretary General Stoltenberg and EU High Representative Federica Mogherini presented a package of pragmatic yet ambitious measures to EU and NATO ministers for the implementation of the Warsaw Joint Declaration.
These measures are now being implemented. They include:

• Measures to bolster resilience to hybrid threats, ranging from disinformation campaigns to acute crises.
• Enhanced cooperation between NATO’s Operation Sea Guardian and the EUNAVFOR Operation Sophia in the Mediterranean.
• Exchange of information on cyber threats and the sharing of best practices on cyber security.
• Ensuring the coherence and complementarity of each other’s defence planning processes.
• Parallel and coordinated exercises, starting with a pilot project in 2017.

The NATO Secretary General and the EU High Representative will report to NATO Allies and EU Member States regularly on the progress of this closer cooperation between the two organisations.

Cooperation in the field

Close cooperation between NATO and the EU is an important element in the development of an international “Comprehensive Approach” to crisis management and operations – an approach which requires the effective application of both military and civilian means. NATO and the EU have long cooperated on crisis management and operations, in particular in the Western Balkans and Afghanistan.
In recent years, cooperation has expanded to maritime security as NATO and EU naval forces have worked together in counter-piracy missions and in response to the refugee and migrant crisis.
In 2004, following the conclusion of the NATO-led Stabilisation Force (SFOR) in Bosnia and Herzegovina, the EU deployed Operation EUFOR Althea, drawing on NATO planning expertise and other Alliance assets and capabilities. The NATO Deputy Supreme Allied Commander Europe is the Commander of Operation Althea. The EU Operation Headquarters is located at SHAPE (NATO’s Supreme Headquarters Allied Powers Europe).
In Kosovo, the NATO peacekeeping force KFOR works closely in the field with the EU’s Rule of Law Mission in Kosovo (EULEX).
In Afghanistan, the current NATO-led Resolute Support Mission and its predecessor, the International Security Assistance Force (ISAF), have cooperated with the EU’s Rule of Law Mission (EUPOL). The EU has also funded civilian projects managed by NATO-run Provincial Reconstruction Teams (PRTs) that were led by an EU member country. Both NATO and the EU supported the African Union’s mission in Darfur, Sudan, in particular with regard to airlift rotations.
NATO and EU naval forces have been deployed side-by-side off the coast of Somalia for counter-piracy missions.

In February 2016, NATO defence ministers decided that NATO should assist with the growing refugee and migrant crisis in Europe.
NATO has deployed a maritime force to the Aegean Sea to conduct reconnaissance, monitoring and surveillance of illegal crossings, supporting Turkish and Greek authorities, and the EU’s Frontex agency. At the Warsaw Summit in July 2016, NATO leaders also agreed on a NATO role in the Central Mediterranean, complementing and supporting EU Operation Sophia. This support is now ongoing with ships and maritime patrol aircraft assigned to NATO’s Operation Sea Guardian providing information and logistics.

Other areas of cooperation

The range of subjects discussed at political consultations between NATO and the EU has expanded considerably over the past two years, particularly on security issues in Europe and its neighbourhood. Since the start of the crisis in Ukraine, both organisations have worked to make sure that their actions complement each other, especially with regard to Russia. Consultations have also covered the Western Balkans, Libya and the Middle East.
To ensure the coherence of NATO and EU capability development efforts, the NATO-EU Capability Group was established in 2003. Experts from the European Defence Agency (EDA) and NATO contribute to the work of the group to address common capability shortfalls such as countering improvised explosive devices.
Both NATO and the European Union are committed to combat terrorism and the proliferation of weapons of mass destruction. They have exchanged information on their activities in the field of protection of civilian populations against chemical, biological, radiological and nuclear (CBRN) attacks.
In the context of closer cooperation on cyber defence, in early 2016 NATO and the EU concluded a Technical Arrangement on Cyber Defence, which provides a framework for exchanging information and sharing best practices between the emergency response teams of both organisations.