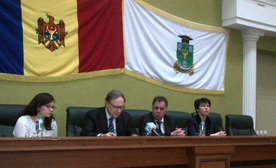 Alexander Vershbow, the Deputy Secretary General of NATO, held a public lecture on May 13th at the State University of Moldova on the topic “20 Years of Partnership for Peace : achievements and perspectives ” . The event was held under the ” NATO Week in Moldova ” project, implemented during the previous week by the NATO Information and Documentation Centre in collaboration with the Ministry of Defense and Ministry of Foreign Affairs and European Integration of the Republic of Moldova. This public lecture was attended by students and professors of the State University of Moldova.

In his speech, Mr. Vershbow initially referred to the changes that have occurred in international realities in the period after the end of the Cold War and NATO’s role in relation to these events. He also brought into discussion issues that threaten international security today, those being  primarily the Russian revisionism manifested these days in Georgia , Ukraine , Transnistria, terrorism, asymmetric or non-traditional threats to security, etc. Mr. Vershbow stressed in this context the important role that NATO partnerships play to ensure an appropriate response to these threats, making a special reference to the NATO partnership with Moldova which he stated he considers to be a natural one. In the second part of the public lecture, the Deputy Secretary General answered the questions by students and teachers present a the event, referring particularly to the topic of the crisis in Ukraine as well as to Moldovan future cooperation with NATO.