Round table on the topic „The Republic of Moldova – NATO partnership. Regional security!” 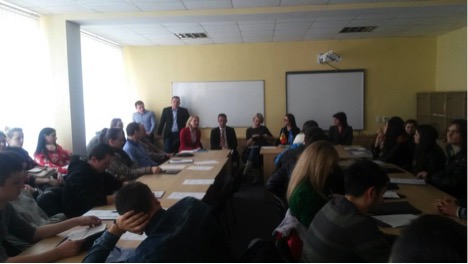 IDC NATO from the Republic of Moldova organized the official visit of the representatives of Political Affairs and Security Policy Division (PASP) of NATO, mr. Krisztian Meszaros and ms. Tanya Hartman.

During the official visit the NATO officials participated on the 9th of March at the round table on the topic  „The Republic of Moldova – NATO partnership. Regional security!”. The event took place at the State University „B.P. Hașdeu” from Cahul and was attended by students, professors, the representatives of the civil society and the Consulate General of Romania in Cahul.

During the event were held speeches by the NATO officials: mr. Krisztian Meszaros, ms. Tanya Hartman and ms. Alla Roşca, co-founder of IDC NATO, professor at the Tulane University from USA and at the State University of Moldova. Ms. Tanya Hartman addressed the subject of the areas of cooperation within the Alliance, as well as the concept of Partnership for Peace. Mr. Krisztian Meszaros talked about the rol of NATO’s Partnerships in the East part of Europe, the erroneous  impressions of the society regarding the Alliance, as well as the evolution of the cooperation between Russia and NATO. Ms. Alla Roșca, during her presentation analyzed the challenges faced by the national and international security, especially the role of the information war within the present society.

The participants discussed during the questions and answers session about the possibility of creating a separate military force of the European Union, the NATO projects in the Republic of Moldova, the pressure exercised by the Russian Federation on the moldovian society etc. During the discussion, the representative of Consulate General of Romania in Cahul argued the role and impact of Romania’s adherence to NATO, mentioning the fact that „Its up to our generation to decide the right path for the country”.

For more information regarding the projects and the public diplomacy activities of IDC NATO, please contact us on [email protected] or at the phone number +37322 577 824