ANNOUNCEMENTSSummary of Discussion forum: 7 Summits, NATO, Biden-Putin Summit and repercussions on the national security of the Republic of Moldova

Summary of Discussion forum: 7 Summits, NATO, Biden-Putin Summit and repercussions on the national security of the Republic of Moldova 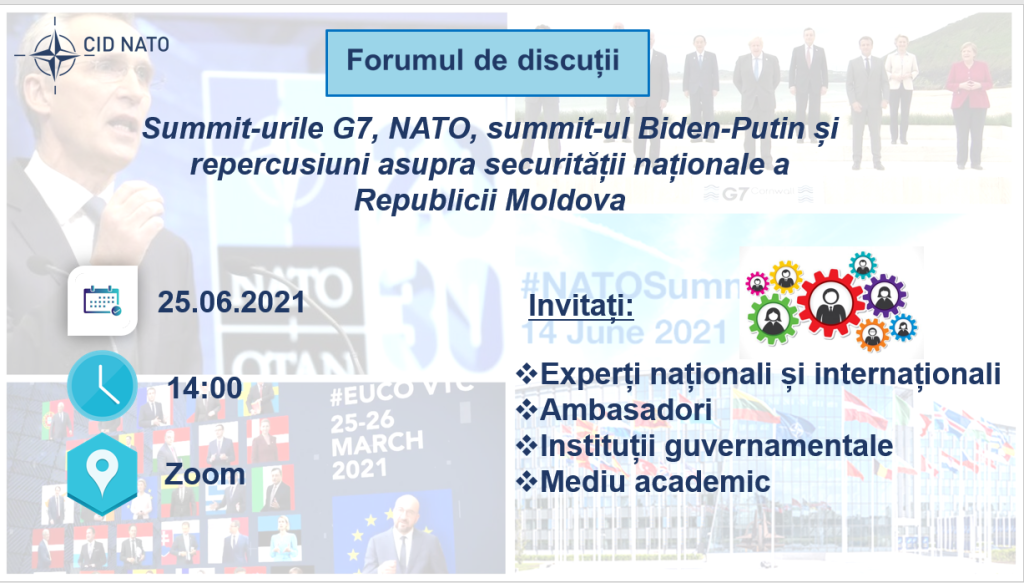 On June 25, the Information and Documentation Centre on NATO in Moldova (IDC NATO) organized a discussion forum on “G7 Summits, NATO, Biden-Putin Summit and repercussions on the national security of the Republic of Moldova” where national and international experts, representatives of the Embassies of NATO countries accredited in the Republic of Moldova, representatives of governmental institutions, academia and students were invited.

Elena Marzac, Executive Director IDC NATO briefly presented what the New 2030 Strategy entails and how partner states can be involved in the future. Also mentioned the importance of the declared NATO Summit for understanding the way the Alliance perceives the Republic of Moldova, but also for understanding the relationship with the Russian Federation. All this acquiring a major significance then our country aims to review the security system and the elaboration of strategic documents in the field.
In Article 14 of the final communiqué, Chisinau is placed in the context of the actions of Russia and the company of Ukraine and Georgia, the other states with democratic aspirations, with important steps towards reform, which want to become members of NATO and the EU.
Thus, NATO and the signatory member states reiterate “support for the territorial integrity and sovereignty of Ukraine, Georgia and the Republic of Moldova, within their internationally recognized borders, and” call on Russia to withdraw its troops stationed on the territory of the three states without their consent”, according to its international commitments.
Another important moment is the continuation of the commitment to support “democratic reforms in the Republic of Moldova” and to provide “assistance through the Defence Capacity Building Initiative.” (DCBI)

Iulian Fota, Director General of the Romanian Diplomatic Institute, spoke about the fact that all the member countries of the NATO alliance but also of the European Union are now at a crossroads, which leads to the need for adaptation from a technological point of view. After a long period of restrictions caused by COVID-19, these 3 summits were necessary for world leaders to discuss current issues and threats. Thus, during the NATO Summit, the decision was made to develop the NATO 2030 concept for the prevention of risks and threats. Also, within the NATO 2030 Concept, a separate chapter on cooperation with partner countries will be developed, which also includes the Republic of Moldova, which will be written together with partner countries. In this way, the Republic of Moldova has the opportunity to strengthen its cooperation with NATO.

Viorel Cibotaru, Director of the European Institute of Political Studies in Moldova, co-founder of IDC NATO mentioned that article 14 of the Final Declaration of the NATO Summit in Brussels, demonstrates the alliance’s position and support for the Republic of Moldova. Thus, the Republic of Moldova needs to develop a roadmap for democratic reform and national security reform. The final statement explicitly states the importance of the sovereignty and territorial integrity of the Republic of Moldova, Ukraine and Georgia. Adaptation and adjustment to find opportunities for development and resolution of the problems and threats of the Republic of Moldova, by reforming security strategies, combating corruption and democratic reform can be carried out through joint efforts and collective cooperation with Ukraine and Georgia. All these efforts will lead to a dialogue with the Russian Federation for the settlement of the Transnistrian conflict, the defuse of the Ukrainian and Georgian conflicts. All these programs must be implemented, especially since there is also NATO support in terms of the final declaration.

Alla Roșca, Doctor habilitat, Associate Researcher at Edgewater Research LLC, co-founder of IDC NATO during the discussion forum, focused on the Biden-Putin summit and repercussions on international and national security. First of all, Alla Roșca mentioned that the Biden-Putin meeting was an example for everyone of the rules of diplomacy. During the meeting, both leaders of the nuclear powers promoted national messages and interests and proof of respect for the interests of the global competitor. In the struggle of the great powers there is always a strong message for developing countries such as the Republic of Moldova. Thus, it is important for the Republic of Moldova to follow the path of democratic reforms, fight corruption and position itself internationally with a clear vision and direction.

At the end of the activity, following the interventions from other experts, it was concluded that it is the right time for the Republic of Moldova to undertake international positioning actions with a well-defined direction, with sure steps for reforming the defence and security sector, political reform and opening dialogue internationally with strategic partners.