Dniester River as a platform for Moldovan-Ukrainian partnership 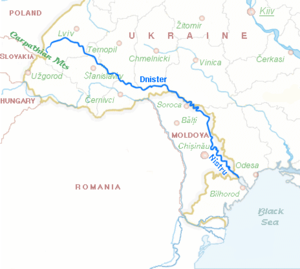 During the last five years Ukraine is actively developing plans of building of hydroelectric network, which would be located along the Dniester coast in order to ensure national energy security and to promote the independence from the external partners. However, these plans could disrupt ecology of the river and have a negative impact on the general state of the Dniester. Ecological conditions of the river cause concern among Ukrainian and Moldovan ecologists. For the Republic of Moldova negative effects of this construction are harmful, but also affect on common (Moldova and Ukraine) ecosystem and remind about responsibility of neighboring countries sharing the river Dniester. Together governments, expert communities and investors are still trying to reach an agreement on this issue, noting the increasing role of the necessity of resolving this problem.

At the moment, Ukraine is operating with 9 hydroelectric power stations on the Dniester and Dnieper: Kyiv, Kanev, Kremenchug, Dneprodzerzhinsk, Dnieper, Kakhovka HPP, Kyiv pumped storage power station, the Dniester HPP and Dniester PSP. But the main element causing the Moldovan concern is Novodnestrovskaya HPP. The work of this power plant, as well as PSP in Sokyryany area, which is still under construction, called the main cause of shallowing of the Dniester on Moldovan territory.
The Dniester River begins in the Carpathians and has 700 km passing through the Ukraine and 660 km during Moldova. It is the most extensive river of Moldova and the second most important for Ukraine. In recent years, sharp decline of the water level was observed, which is associated with the construction of additional turbines on the Ukrainian Novodnestrovskaya HPP.
In the connection with the high burden at the river Dniester environmentalists have expressed serious concerns about the fact that the increase of exploitation of the river will lead to irreversible consequences. In particular, to the increasing of water’s pollution, the decreasing of water’s level and the overall shallowness and environmental disruption. An important argument for concern lies in the fact that more than 70% of industrial water is taken from the Dniester River, so any violations of this river are very dangerous. In addition, changes and the depletion of the aquatic ecosystem have a great impact on groundwater, that in its turn has global consequences for the local climate and agricultural sector.
This problem become a subject of negotiations on the mutual initiative of experts in Moldova and Ukraine in 2013, but at the moment the main initiator of the talks is the Moldovan side. At the same time there also many sides interested in this question. To save the Dniester in the framework of UNECE (United Nations Economic for Europe Committee) was created a project called „Dniester”, which aims to studying, monitoring and evaluating the general condition of the river, and to identify the possible impact of human activities.
During the last two years, the negotiations about the using of the Dniester became a great discussion in the mostly expert communities. This is primarily due to the political situation in Ukraine and its reorientation of internal resources for other tasks related to the maintenance of economic stability and implementation of reforms. The Moldovan government also shifted to other issues, which are selected as priorities. They are primarily related to European integration, to change of government and coordination of reforms.
This situation has changed by mutual agreement in November 2016, which was reflected through the meeting of Moldovan-Ukrainian intergovernmental commission in Chisinau. This was the result of long negotiations and developments carried out during the previous years. Both sides agreed to resume negotiations on the Dniester hydroelectric complex, which is the main reason of dehydration and environmental threats in February 2017. On 16 November the government of the Republic of Moldova approved a draft agreement with Ukraine about the work of the Dniester hydroelectric complex, involving the return of Moldova’s right of co-management towards Novodnestrovskaya HPP. The project also noted that Ukraine assumes responsibility not to worsen the condition of the Dniester’s water in the vicinity of HPP-2. The Moldovan side proposes to conclude an agreement for five years, after which the contract shall be automatically extended for the same period in the absence of objection The project additionally involves the creation of bilateral commission that will monitor compliance all the points stipulated in the agreement. This event is not a final resolution of the problem, since it does not affect the environmental side of the issue. The expert community of Moldova with the Ukrainian colleagues note that Novodnestrovskaya HPP does not comply with prescribed standards of environmental standards, while the Moldovan side exceeds the allowable charges from the Dniester. This question had not been raised in the process of preparing of the joint project, but in the near future it could provide a new platform for experts from both countries and their colleagues from the UNECE to pay more attention on this issue and to offer practical recommendations to eliminate all the threats.